AFRICA CALLING - explore the ethos behind the Careless Rhythm Collection

Sand dunes are some of the world's great natural wonders. Formed by the winds that sculpt their spectacular, compelling, rhythmic shapes, they are a dramatic canvas for Mother Nature to paint beautiful images of ripples, curves & peaks in rich, soft colors.

Sand dunes were formed thousands, sometimes millions of years ago, and play an irreplaceable part in protecting inland areas from swells, tides, and winds. Now they need us to protect & defend them like the national treasures they are. The biggest and most common threats to sand dunes have a human origin - construction as well as sand mining and farming. We are trying to help by donating some of the proceeds from the collection to environmental agencies.

Rock crystal is the stone featured in the collection. Fascinating as well as beautiful, it's also the predominant component of sand & the reason why sand sparkles brilliantly in the sunshine.

"I always find beauty in things that are odd & imperfect" - Marc Jacobs. Bespoke-cut to showcase their icy white inclusions (imperfections), no two pieces of rock crystal in the collection are identical.

One of the oldest materials known to man & quite possibly the most interesting, there are more beliefs surrounding rock crystal than any other stone on the planet.

Ancient Japanese believed quartz formed from the breath of a white dragon, and regarded it as representing perfection. Australian Aborigines used quartz in rain rituals. The word crystal comes from the Greek word "krystallos" which means ice, & one of the many myths says its clarity comes from water frozen inside.

Since the middle ages people have believed that rock quartz is a living soul with an extraordinary power nestled in its crystals. This idea continues today - fortune tellers still use crystal balls to delve into our innermost secrets.

Considered a power stone & a master healer, rock crystal has been called the 'Universal Crystal' because of its many uses. Enhancing energy by absorbing, storing, amplifying, balancing, focusing and transmitting, it's also said to enhance thoughts, as they are a form of energy. Because it directs and amplifies energy, it is extremely beneficial for manifesting, healing, meditation, protection and channelling. 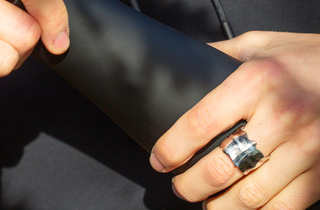 06 Dec 2020 WHAT'S NEW
" Camouflage is the most interesting of all the arts" - Kris Saknussemm. Discover more about the new collection
Read more